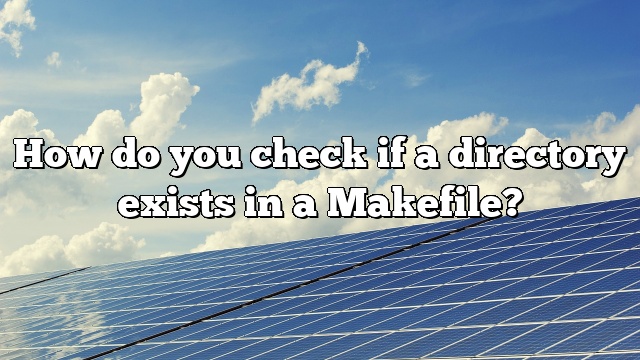 Solution 1: Make commands, if a shell command, must be in one line, or be on multiple lines using a backslash for line extension. So, this approach will work:
Solution 2: This approach functions with minimal echos: .PHONY: all all: ifneq ($ (wildcard ~/Dropbox/.*),) @echo “Found ~/Dropbox.”
Solution 3: Act upon the absence of a directory

You can check if a directory exists using our generic function. Let’s take a simple example where we just want to load an exceptionally large directory if it doesn’t already exist. , “”) @echo “The directory will not exist.”

Each run in the makefile is sent to the shell separately, so the actual “” to get multiple lines is treated as a single line. Thanks a lot. Another question? 1. UNIX for beginners. FAQ Check if there is at least one file in this directory.

Each line of a valid makefile is executed in a separate commit. It means your rule here: /bin/sh -c [“if -f ./bin/status.]; bin/sh -c “fi” You can determine why you are getting this message. To make sure all lines are written in one shell, you must use backslashes for all strings, like this:

How do you check if a directory exists in a Makefile?

How to test whether a directory exists inside a makefile?

I tried using it internally to run the makefile like this: bring foo.bak (assuming foo.bar exists) and see if the following error occurs: The workaround I did was to have a separate script bash where the test is actually implemented and I called the illegal program from the makefile. However, it looks very cumbersome.